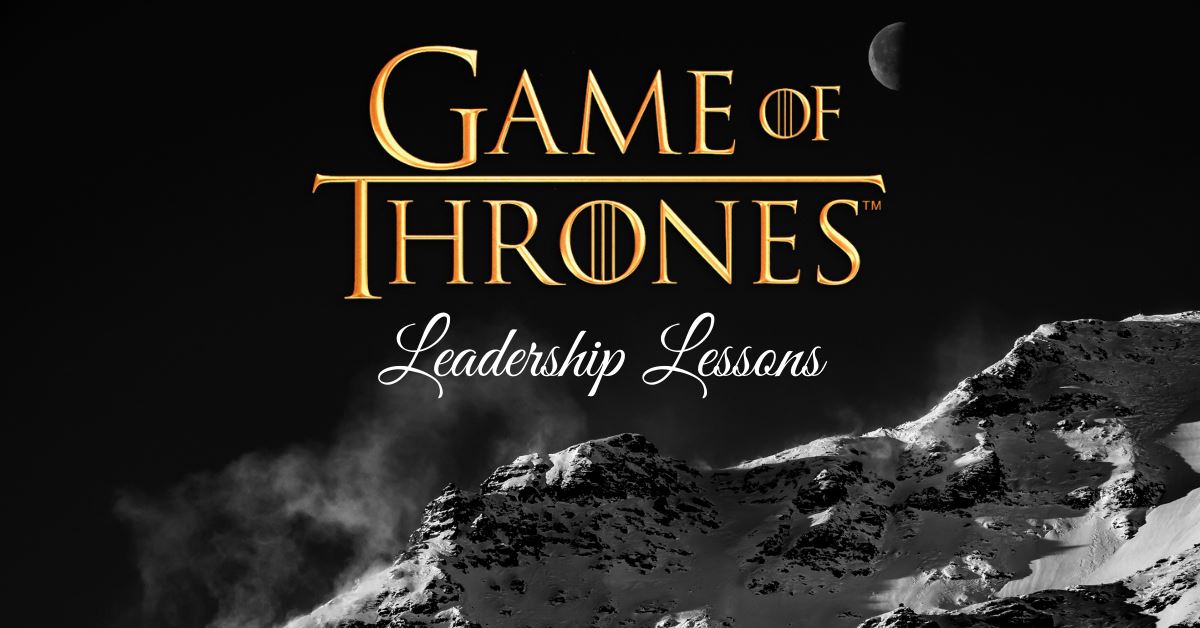 Be honest, Sunday’s at 9pm haven’t been the same since Game of Thrones ended.

I used to love watching the 9 families jostle for control of the iron throne of Westeros. Mostly for all the sex, blood and guts (just me?).

Anyway, even though the creator David Benioff jokingly calling GoT “The Sopranos in Middle-Earth” there were some real gems of wisdom dropped on us.

What I loved most was how they were better than anything I’d read in the leadership books, so I’ve gathered them together for all you Thronies.

This quote isn’t unique to Game of Thrones, in fact its recorded in Aesop’s fables and Homer’s Iliad and has also been attributed to C.S Lewis.

As a leader (whether you’re leading your own life or have a team under you) you need to stand by your beliefs about where you’re going.

Doubters, critics and naysayers are often the loudest and largest camp, but the lion knows it’s the king of the jungle and does what it wants.

Lesson: Listen to others, but make your own decisions. Keep moving in the direction of your goals regardless of you critics, no matter who they are.

Power resides where men believe it resides. It’s a trick. A shadow on the wall. And a very small man can cast a very large shadow. ~ Lord Varys Click To Tweet

Have you seen the Wizard of Oz?

The all powerful “Great Oz” was an illusion covering for an ordinary conman from Omaha, Nebraska. Oz used elaborate magic tricks to make himself seem “great and powerful to the people.

Varys is talking about the same thing in this quote. The controversial 48 Laws of Power also talks about reputation being “the cornerstone of power” and that “through reputation alone you can intimidate and win”.

Lesson: Don’t leave your reputation to chance. Look for opportunities to bolster it and guard it well. Your reputation is your life’s artwork.

This quote from Ned Stark is still relevant today.

Politicians send other people’s children to their deaths in wars and judges sentence prisoners to death – both far removed from the blood and guts.

Ned continues “If you would take a man’s life, you owe it to him to look into his eyes and hear his final words. And if you cannot bear to do that, then perhaps the man does not deserve to die.”

Lesson: As a leader its easy to be removed from the realities as you ascend the ladders of power. The best leaders stay close to the ground, walking through their company, meeting staff at all levels of seniority so they understand the gravity of their decisions.

Any man who must say ‘I am the King’ is no true King. ~ Tywin Lannister Click To Tweet

One of my greatest mentors, Rajesh Nagjee taught me that your reputation doesn’t belong to you, it belongs to the community you belong to.

So as Tywin alludes to, you can’t just claim to be something, other people need to proclaim you as king.

Lesson: By helping other people get what they want, you’ll get what you want. Look for opportunities to uplift and support the people around you. When you do this consistently over the long term, your people will love and follow you.

As Jon Snow is finding his place in a world that cast him aside, he annoys Ygritte by making assumptions about the WIldlings culture. Melisandre later tells Jon the same thing.

This one might be the most quoted GoT reference, but under the humour is a solid lesson.

The best leaders are always asking “what don’t I know?” rather than focusing on what they do know. They do this because their vulnerability is in what they’re unaware of.

Lesson: Focus on the gaps in your knowledge. Find people smarter than you and surround yourself with them. Look for sources of insight you wouldn’t have access to alone.

There’s a beast in every man, and it stirs when you put a sword in his hand. ~ Jorah Mormont Click To Tweet

Firstly, I cried real tears of laughter when I heard the internet labelled him “Sir Jorah Mormont of House Friendzone”. 🤣

Anyway, JM drops this jewel on us which is about power corrupting even the holiest of men. Ironically, he’s busy chasing Khaleesi around Westeros not knowing that she’s going to scorch the people of King’s Landing to a crisp later on.

This is similar to the “with great power comes great responsibility” maxim that you’ve undoubtedly heard before.

Lesson: Having all of the power makes you vulnerable. This is why corporations have boards of directors and countries have democracies. You can retain control, but discuss and debate the important issues with your trusted advisors to ensure your decisions are balanced and sober.